The North Koreans have the whole world focussed on them for some time now. Inspite of all the threats that President Trump has promised, the North Korean President Kim Jong-un has continued with his nuclear and missile tests. However, a softening of attitude seems to be underway with the North wanting to join the Winter Olympics in Seoul and agreeing to dialogue with the South. The author carries out a detailed evaluation of North Korea’s military forces and its nuclear capabilities. He also provides a glimpse into the Pakistan-North Korea nexus in terms of proliferation of nuclear technology between the two countries.

Japan had occupied the Korean peninsula from 1910. The Second World War witnessed Japan’s surrender in 1945. Prior to the surrender the Soviet Union declared war on Japan and advanced into South Korea. Though the declaration of War was agreed to by the Allied powers, the United States did not want the entire country to be under Soviet control as there was a lurking suspicion that the Soviets would transform the areas occupied by them. This was undoubtedly the case. 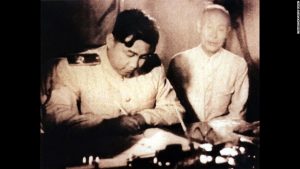 The surrender of Japan led to the division of Korea into two portions, North of the 38th parallel was under Soviet control and the Southern portion was controlled by the United States (US). However, the two powers could not come to an agreement on the ownership of these regions. This led to two portions forming separate Governments, the Soviet aligned Communist North Korean Government known as the Democratic People’s Republic of Korea and the US aligned South Korean Government known as Republic of Korea. Both claimed to be the legitimate Government of Korea and this obviously led to problems.
As these problems could not be resolved it led to outbreak of War on 25 June 1950 with North Korea invading South Korea. The United Nations with the US as the principal force came to the aid of South Korea. The war ended in a stalemate on 27 July 1953. The Chinese actively participated in the war but they could not be of great use. An armistice was signed and the area around the 38th parallel became the DE Militarised Zone commonly referred as the DMZ.
South Korea under US influence became a rich country with large number of industries. North Korea’s first leader was Kim il Sung. transformed the country into a Communist dictatorship. He was a dictator and he ruled till he expired in 1994. He was succeeded by his son Kim Jong-il who ruled till he expired on 29 December 2011. As his eldest son had expired in 2011, he was succeeded by his second son Kim Jong-un who is in full command of the country.
While the United States and South Korea have been working for reunification North Korea has invested heavily on its Military and Nuclear weapons to ensure that it remains independent. 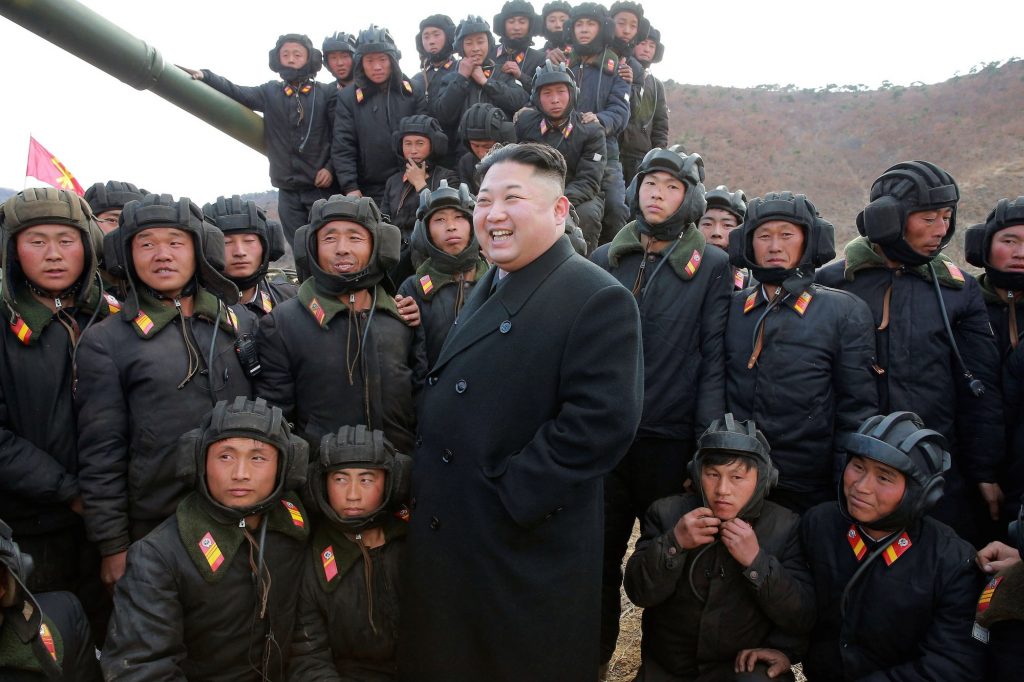 As per the Military Balance 2017, North Korea continues to define the development of nuclear weapons and ballistic missiles as central to its military power and survival despite international sanctions. Further, the leadership is very clear that the country must have strong conventional forces to threaten South Korea in the event of a non-nuclear option. The conventional forces are equipped by and large with weapons which older vintage; primarily it’s a manpower intensive force.

The important elements for the Army are mentioned beneath:-

The Missile launchers are also under the Army and they possibly include the following:-

• Fifty Four Short Range Ballistic Missile Launchers. Out of these 24 are FROG 3/5/7, some KN-02, about 30 Scud- B/ Scud – C missile Launchers. It is estimated there are currently about 200 missiles.

The North Korean Navy has about 60,000 personnel. It is hard to believe that the country has about 73 submarines and a few frigates. The Air Force has 401 jet fighters with a variety of MiGs out of which 18 areMiG 29. There are about 34 Su-25 aircraft and a large number of helicopters. There are a total of 110,000 personnel in the Air Force. There are four Air Divisions and the Air Force controls the national airline. North Korea has Unmanned Aerial Vehicles (UAVs) and a fair quantity of transport aircraft.
North Korean personnel are similar to the Chinese in their fighting capabilities. They would like to fight an asymmetric war if the need arises with South Korea being duly assisted by the US. Any attack on critical North Korean locations will result in swift retaliation by North Korean firepower elements. It is pertinent to note that South Korea’s capital Seoul is located about 35 km South of the DMZ and is within artillery range of the following North

• 170 mm Koksan Self Propelled Gun with Rocket Assisted Projectiles. There are reportedly 500 Guns deployed within the range of Seoul.

• 240 mm BM-24 Multiple Rocket Launcher. The improved version has a range of 70 km. It is believed that 200 launchers are targeting Seoul.

• 300 mm KN-09 Multiple Rocket Launcher. This is similar to the Smerch system of Russia. Exact quantity is not known.

With this equipment North Korean artillery can reach specific areas which would certainly impact Seoul thereby causing casualties. Being an authoritarian country retaliatory fire by South Korea would be taken in stride. Crossing the DMZ by ground troops would be difficult and unlikely to be attempted by either side. Accordingly, a pre emptive conventional attack on North Korean targets would not be a wise option. 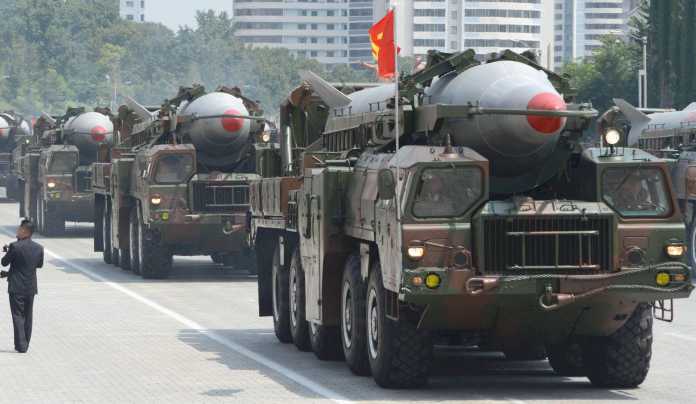 North Korea realised at a very early stage that its survival against the United States and South Korea rests on possessing nuclear deterrence. Accordingly, around 1963 North Korea asked help for developing nuclear weapons from the Soviet Union which was turned down. Later, China also refused on similar lines. However, the Soviet Union helped North Korea to develop a peaceful nuclear energy programme. They also agreed to train their scientists in the peaceful use of nuclear energy. Soviet engineers took part in the construction of the Yongbyon Nuclear Scientific Research Centre and began construction of a research reactor in 1963 which was operationalised in 1965 and was upgraded to 8 MW in 1974.
In 1979 North Korea indigenously began to build a second research reactor, an ore processing plant and a fuel rod fabrication plant.
In 1985 North Korea ratified the Non Proliferation Treaty (NPT) but did not undertake the required safeguards agreement till 1992. In 1993 North Korea withdrew from NPT and gradually started acquiring nuclear weapons technology from Pakistan. This was confirmed by Pakistan in 2002. In 2003 North Korea finally withdrew from the NPT and in 2005 it admitted that it possessed nuclear weapons.
On 9 October 2006, North Korea announced it had successfully conducted its first nuclear test. An underground nuclear explosion was detected with yields less than a Kiloton. The second nuclear test was conducted on 25 May 2009. The explosion was estimated to be between 2 and 7 Kilotons. The third test was in February 2013 and the fourth in January 2016. The fifth test was in September 2016 suggesting a 20 to 30 Kilotons yield. On 3 September 2017, a hydrogen bomb was reported to be tested. There are varying accounts as to the number of warheads North Korea possesses. The arsenal is said to vary between 13 to 60 warheads.
As regards delivery systems, North Korea has been supplying missiles to a number of countries including Pakistan. The last missile test was undertaken on 28 November, 2017 and it has been assessed by the United States Armed Forces to be an ICBM capable of reaching the United States. Accordingly, North Korea hold out a threat to US, Japan and South Korea with nuclear weapons.

North Korea, despite all the sanctions, has manoeuvred craftily in becoming a nuclear weapons state. The United States needs to handle the situation carefully before it gets out of hand. North Korea is currently making peace overtures to participate in the Winter Olympics in South Korea. The moot issue is what are its intentions? They have to be diplomatically handled and got to the dialogue table.

Pakistan has acquired missiles from North Korea and provided assistance to North Korea in manufacturing nuclear weapons. The September 2017 test of possibly a Hydrogen bomb by North Korea could result in passage of data to Pakistan which could attain the capability of developing thermonuclear weapons.
India needs to closely monitor the dynamics of these events. Both Pakistan and North Korea are great friends of China and India must analyse and deduce inferences from the nimble footed strategy of Pakistan and North Korea. Vigilance is the need of the hour to guard against nuclear proliferation.