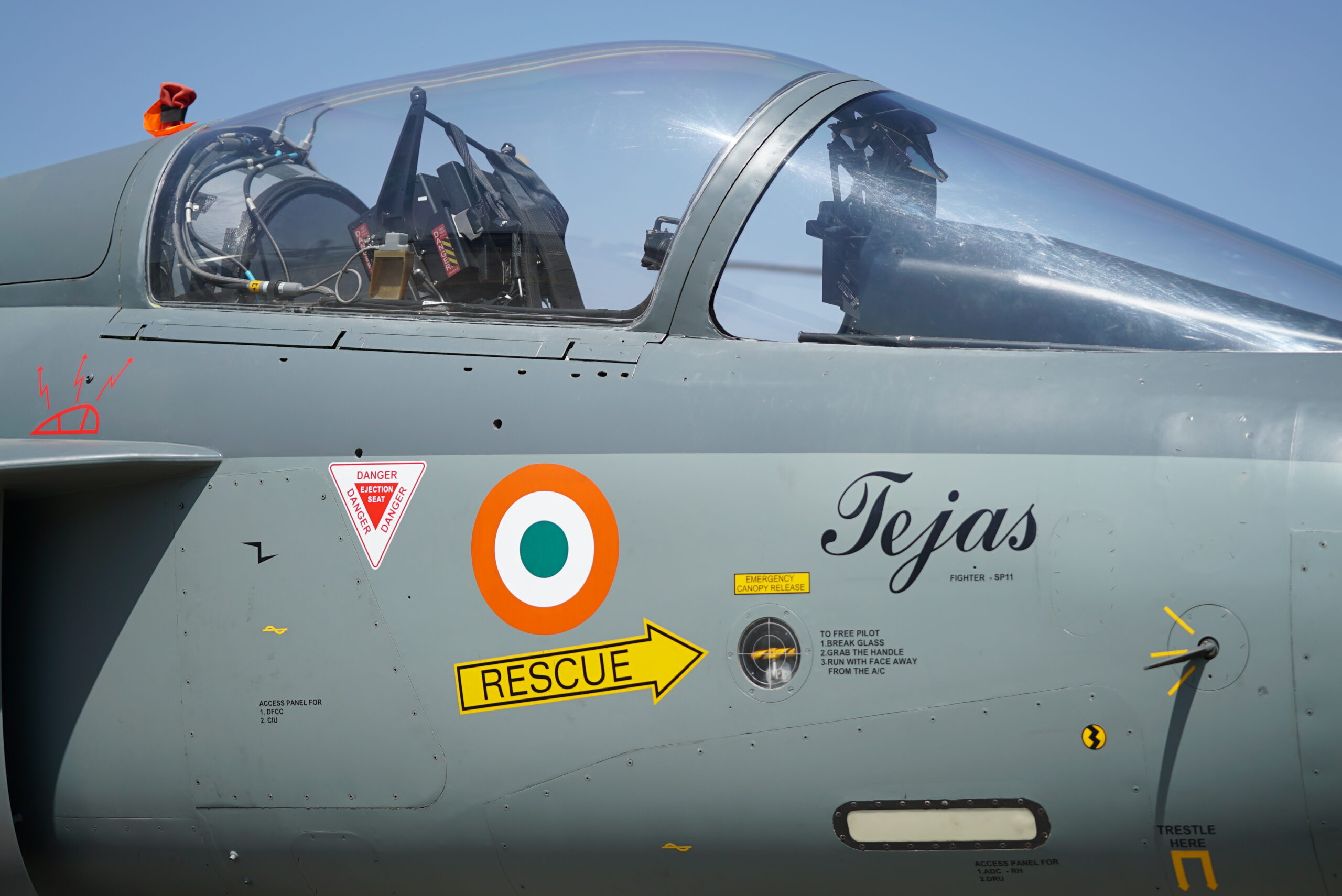 With the government approval of the purchase of 83 indigenously developed Light Combat Aircraft, Tejas Mark 1A from Hindustan Aeronautics Ltd (HAL), the negativity about the delayed programme and doubts over its performance have dissipated in no time. It is the biggest-ever contract worth $ 5.6 billion (Rs. 48,000 crores) awarded to India’s domestic military aviation industry, involving about 500 Indian companies, including MSMEs (Micro, Small and Medium Enterprises) in the design and manufacturing sectors, which will be working with HAL in this procurement. The programme would surely act as a catalyst for transforming the Indian defence and aerospace manufacturing ecosystem into a vibrant Atmanirbhar (self-sustaining) sector.

Defence Minister Rajnath Singh has rightly hailed the move as a “game-changer” for India’s defence manufacturing has so far been seen as being incapable of catering to the country’s defence needs.

The smallest, lightweight, multi-role, single-engine tactical fighter aircraft in the world, Tejas highlights the success story of indigenous design, development, production and induction of a ‘4+ Generation Fighter’ into the Indian Air Force (IAF). Though it was conceptualised in 1983 to replace the Russian-made MiG-21, the Tejas programme actually commenced with government approval for ‘LCA Full Scale Engineering Development Phase 1’ only in June 1993. With this sanction, the indigenous project took wings seven and half years later when TD-1, the Technology Demonstrator of Tejas aircraft flew its maiden flight on 4 January 2001 followed by the LCA Demonstrator II flying in June 2002.

The success of Tejas programme is a collaborative effort of Aeronautical Development Agency (ADA) as lead Design Agency under Defence Research & Development Organisation (DRDO) and HAL as lead Production Agency along with many other agencies. However, getting the LCA project off the ground was a long and arduous three-decade journey plagued with multiple problems and several missed deadlines due to various factors.

Journey-in-the-Making: What Took Tejas so Long to Fly

Speaking about the chequered journey with BharatShakti, the former Director of ADA and Project Director of LCA programme, Commodore CD Balaji (Retd), who is widely regarded as one of the main architects of the LCA programme said, “Actually in 1983, the government decided to set up ADA with a small team to find out whether India can build and develop an indigenous aircraft or not? Dr Kota Harinarayana was heading that group and that is how it was started. However, the final Cabinet approval for full-scale design and development of Tejas prototypes was given in 1993 – 10 years down the line. That is the actual start point of the programme formally. It was not 1983 but 1993 was the base year for the journey”.

The first trigger of the project was when Wing Commander Rajiv Kothiyal took to the skies for a short sortie of 18 minutes on 4 January 2001.

Countering the criticism over delays of the Naval version of LCA, Cdre Balaji clarified that the Cabinet approval was given on 23 March 2003 and the aircraft was rolled out in 2010; seven years down the line. “We had promised in the Cabinet note that it would take about seven years plus time because it’s completely a different animal compared to the air force version. We had a flight in April 2012 which was exactly nine years. It’s fairly contemporary if you look at it from whichever way you look at. That’s history and all the negativity has been washed away now,” he said.

While Tejas was being tested and flown in India, one of the landmark events took place in January 2016 when it was flown at an airshow abroad for the first time, recalled Cdme Balaji and Dr. Radhakrishnan, then the man in charge of industry interface at DRDO headquarters. They feel the crucial trigger was LCA Tejas making a spectacular debut in foreign airspace to participate in the Bahrain International Air show from 21 to 23 January 2016. The performance of the Tejas in the Air show was phenomenal with Tejas soaring majestically over the Bahrain sky. Tejas impressed not only global aerospace experts but the international media took note of it which helped deflect all the negative perceptions about the aircraft’s operational performance that makes it a combat-worthy fighter.

Dr S Radhakrishnan, who was then the Director, Directorate of Industrial Interface and Technology Management, DRDO fondly recalls, “Bahrain was a historic event not only because LCA left the shores of India for the first time and was flown in full view of an international audience and the global media, but because ‘Tejas presence called the Pakistani bluff when they withdrew the JF-17 Thunder fighter produced with Chinese from the aero show.  They didn’t want to be compared with our LCA in terms of performance. They decided to pull back by paying a huge penalty to the Bahrain authorities for not turning up. It was a huge victory for our LCA because Tejas was far better than the Chinese JF-17; not only in performance but in every aspect.”

The second trigger was the IAF’s Iron Fist exercise held at Pokhran in the Thar deserts of Rajasthan on 18 March 2016 where Tejas fired US and Russian origin missiles, shoulder to shoulder with contemporary aircrafts with flying colours, as the users watched with a hawk’s eye.

The third trigger was provided when the then Air Chief Marshal Arup Raha flew in the two-seater LCA trainer on 17 May 2016. Raha said it’s a good aircraft to fly and it should be inducted into IAF’s fleet. The current Air Chief RKS Bhadauria was the Deputy Chief of IAF then and he was present in Bengaluru during the flight.

On 1st July 2016, history was enacted when the ‘Flying Daggers’ – 45 Squadron of the Indian Air Force was formed based at Air Force Station, Sulur in Tamil Nadu. It was a big step forward in the journey of these 83 aircrafts.

“One more trigger was enacted in August 2016, when the 2-seater aircraft which the Air Force Chief flew, was flown to Leh for the hot and high altitude trials as a confidence build-up”, Cdre Balaji disclosed. Flying fighters is a challenge and the trainer model is an additional challenge because of its heavier mass with two pilots and full weapons load. The requirement was to carry 1500 kg of payloads. We carried 2300 kg of payloads in the hot and higher altitudes successfully”, said Balaji revealing the operational details.

Probably the final trigger was the Republic Day Flypast on 26 January 2017. It was after two-decades, a single-engine aircraft was allowed to fly past the Rajpath. It was the then Defence Minister Manohar Parrikar who not only approved the exercise but insisted on showcasing its prowess on that occasion.

In November 2016, Defence Acquisition Council (DAC) chaired by Manohar Parrikar cleared the acquisition of 83 Tejas Mk1A variants, bringing the total number of orders to 123. It was no secret that Parrikar put his weight behind the project and helped overcome the resistance of the IAF and bring the project to fruition. “It was Parrikar who pushed to showcase Tejas’ prowess to the world in the Bahrain Air Show”, disclosed Radhakrishnan, the man-in-charge of industry interface of LCA programme.

The orders for 83 aircraft will, in the long run, will cement the industry as India fast becomes a manufacturing hub for not only Indian equipment but also for exports to markets abroad. “India was always faced with the question – ‘can we’; that has now changed to ‘we can’. That sense has changed from scepticism to optimism. We are poised for great things in the future – we have the building blocks available, infrastructure, human resource capital which we need to nurture,” said Balaji. Commenting on the significance of the indigenous programme, he added, “This project has brought up a technological development base in India as there was no technological development programme in this country before. This base would work as a springboard for future programmes – a big positive take away from the Tejas project”.

India now aspires to indigenously make the Advanced Medium Combat Aircraft (AMCA). If AMCA is to avoid the path taken by the LCA, it will need stronger political handholding than that given to the LCA over the last three decades. India needs to have a more sophisticated technological base to successfully execute high technology projects. The achievement of Tejas should provide the momentum to create a long term manufacturing eco-system for fighter aircraft not just for the use of Indian Air Force but also for exports to other friendly countries.