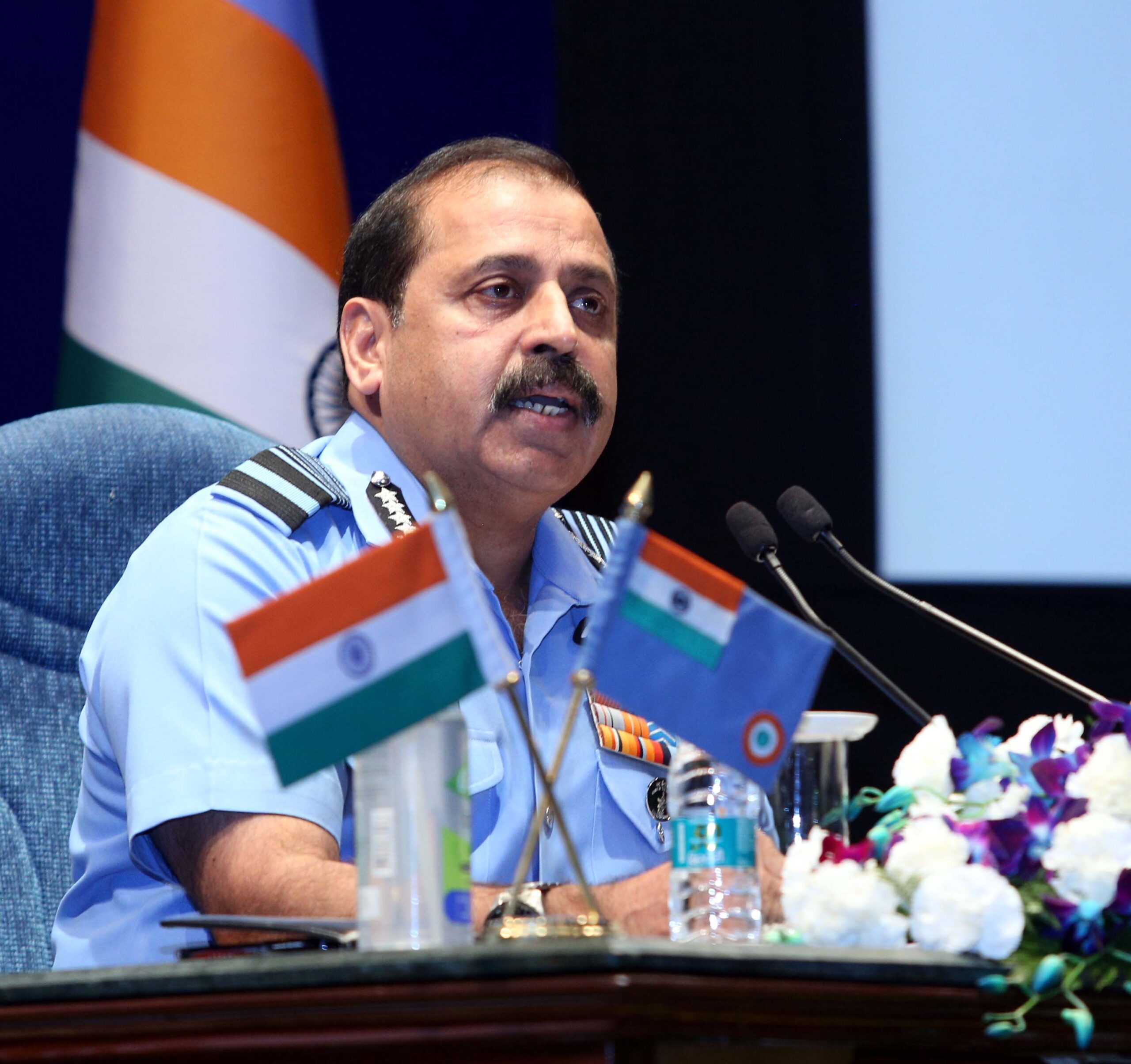 Air Chief Marshal Rakesh Kumar Singh Bhadauria said that the Indian Air Force is fully ready for any possible conflict, including a two-front war, when asked whether the IAF is ready from both China and Pakistan. “The emerging threat scenario in our neighbourhood and beyond mandates need to have a robust capability to fight across the entire spectrum of warfare. I can share with you with confidence that operationally, we are amongst the best. Our capabilities have surprised our adversary. Indian Air Force is transforming at a rapid pace,” he said at a press briefing held on 5th September in the capital.

When asked how the IAF would respond if China uses Pakistan’s Skardu airfield located in the occupied Gilgit-Baltistan area,  the Air Chief said that such a move would be a “collusive threat” and  the IAF will deal with it accordingly. “Whether China will use Skardu, is an open-ended question. But if China needs to take Pakistan’s help to confront us, I have nothing to say. We are in a conflict with China, if Skardu gets used by China then it is a ‘’collusive threat’’ and we will deal with it accordingly,” he explained.

However, he added that there are no indications to suggest that the two countries are colluding. “We are observing all the activities across, to my mind, there is no indication that they are planning a collusive threat. We’re aware that China and Pakistan are cooperating closely and Pakistan is now increasingly dependent on China for their defence supplies and they are doing a lot of exercises together. They have embedded their teams together in some forms, at times. Their bilateral exercises are on a significant increase. But there is no sign that we face the collusive threat and we are deployed for a two-front war. There is no such indication,” the IAF Chief cleared the air on the China-Pakistan collusiveness.

Pakistan’s move to convert Gilgit-Baltistan (GB), which is part of the disputed territory of Kashmir region between India and Pakistan, into its fifth province is being seen as yet another move by China to change the status of the region. Analysts link Prime Minister Imran Khan and Army Chief General Qamar Javed Bajwa’s anxiety to force through the change in GB’s status to mounting pressures from China to secure the China Pakistan Economic Corridor (CPEC) that Beijing wants to expand under Xi Jinping’s Belt and Road Initiative (BRI).

“The western route of CPEC goes through GB and it seems China is advising Pakistan to move on and accept the status quo with regards to the Kashmir conflict. It wants to consolidate all areas under CPEC to use it productively for the project,” says Ayesha Siddiqa, a Pakistani analyst. She believes that the Pakistan Army can no longer solve the Kashmir issue, which includes GB region, militarily.

The proposed move at China’s behest has provoked strong opposition in Pakistan. Imran Khan’s rival Maulana Fazlur Rehman joined ranks of opposition leaders who have spoken against Prime Minister for implementing Beijing’s agenda. The Jamiat Ulema-e-Islam (F) Chief underlined that turning the Gilgit-Baltistan area into a full-fledged province would end up validating India’s 5 August decision to treat Jammu and Kashmir as a centrally-administered territory. “A deal has been made over the blood of Kashmiris… Business is being done in the name of Kashmir diplomacy,” the firebrand cleric said on 29th September. He pledged, “Not to allow the partition of Kashmir”.

Opposition leaders have termed Imran Khan’s move as a conspiracy to ‘sell Kashmir’. A large number of local groups protest against the human rights violations and land grabbing as China pushes for projects resulting in fear among the locals of the area eventually turning into a Chinese colony.

Taking a leaf out of Chinese President Xi Jinping’s tactics of deflecting the Chinese citizens’ attention from domestic issues through distractions, Imran Khan has now tried his hand at deflecting attention on Gilgit-Baltistan issue.

A new study by the German Marshall Fund (GMF) reveals that China has recalibrated its ongoing flagship China Pakistan Economic Corridor (CPEC) project, thereby hugely impacting its objectives. “The troubles faced by the China Pakistan Economic Corridor (CPEC), the flagship of China’s Belt and Road Initiative (BRI), are perhaps the most conclusive demonstration that the BRI model that has been in place for the last few years is no longer sustainable. Even before the coronavirus pandemic, CPEC had stalled. Not only are the figures commonly cited for the total package of projects under this framework since its launch in 2015 which run as high as $62 billion no longer accurate, but investments of that magnitude also are not under consideration either,” says Andrew Small, author of the study.

In the coming years, the CPEC agenda will therefore largely be focused on completing investments that have already been agreed (including around Gwadar port), moving ahead with considerably slimmed-down plans for special economic zones, and identifying small additions that fit the current Pakistani government’s agenda, such as socioeconomic projects. This is a change in scale from the aspirations that once characterized the scheme, which one Chinese official characterized as moving from “mega projects” to “peanut projects,” the study says.

“Scored against the original objectives set by the Chinese and Pakistani governments, CPEC is a disappointment. It hasn’t been a “game-changer”, and it has been years since anyone on the Chinese side seriously talked about it in such transformative terms,” said Small.

According to the study, several factors contributed to the downgrading of ambitions for CPEC by Pakistan and China. It has been hit on three fronts – economic, political and strategic. Economic considerations are primary. Pakistan’s fiscal and balance-of-payments situation means that the full–scale version of CPEC is not financially viable.

The fresh scandal has forced Chinese President Xi Jinping to postpone his planned trip to Pakistan, indicating his unhappiness with the Pakistani military establishment. China’s overbearing presence in Pakistan has led to opposition political parties to compare Chinese companies with the East India Company.