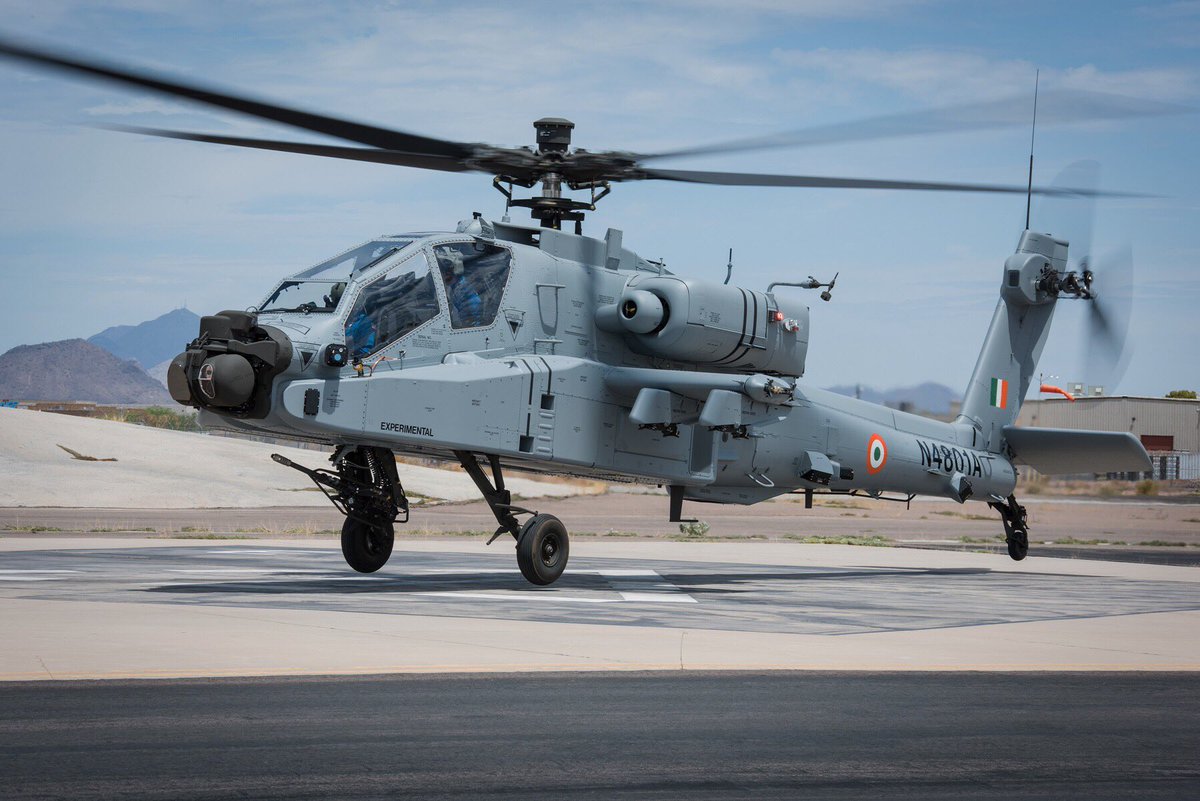 The Indian helicopter fleet requires immediate resuscitation. Its state is far below par for operational usage. A beginning has been made by purchasing limited numbers of the American Apache AH-64E; however, the issue needs to be addressed with far more vigour. Attack Helicopters (AH) are an essential and critical requirement for any force commander in a mechanised battlefield. The author brings in a comparison of three models; one a product of Hindustan Aeronautics Ltd (HAL), and the other two of Turkish and Chinese origin.

With India’s indigenously developed Light Combat Helicopter (LCH) is likely to enter service this year. It’s worthwhile to look at the attack helicopters in the same class and category held with China and Pakistan and analyse their capabilities vis-a-vis the LCH. Turkey’s T-129 ATAK merits attention as our adversary Pakistan has already trial evaluated this helicopter and signed a contract with Turkey in July 2018 for acquiring 30 of these T-129 attack helicopters. However, the deal is presently on hold as the export license needed from the US is not forthcoming due to numerous diplomatic spats between the two NATO allies. The American nod is required as the engine of T-129 ATAK is manufactured jointly by the British Rolls Royce and American Honeywell, giving the US powers to veto any prospective export.

While both China and India are the world’s largest military helicopter markets, they did not possess a suitable dedicated attack helicopter in their inventory until very recently.  In the early seventies, while the Indian Military had a limited number of Chetak helicopters armed with TOW anti-tank missiles, the Chinese in their modernisation thrust had procured eight French Gazelle helicopters equipped with HOT anti-tank guided missiles. Over the years the Chinese military has made deliberate and concerted efforts to acquire a state of art Attack Helicopter, ex import. Thei

r efforts to acquire the Italian A129 Mangusta and subsequently the American AH-1 Huey Cobra came to nought, mainly due to sanctions by western nations.

In 2003, the Chinese finally embarked on a development project for a combat helicopter of their own. The result is the development of the new Chinese AH Z-10 which was displayed for the first time at China’s International Aviation and Aerospace Exhibition in Zhuhai in 2012. The Z-10 is one of the newest, modern, state of art AH in the world today. According to data available China has around 100 plus operational Z-10 AH with the People’s Liberation Army (PLA).

The Indian Military, on the other hand, was able to replace its old and vintage Chetak armed helicopters with the Russian MI-25/MI-35AH acquired in the late eighties and early nineties to equip two squadrons of the Indian air force.  However, the Kargil conflict was the trigger for the development of a dedicated AH, capable of operating in the mountains, including high altitude areas due to the inability of the MI-25/MI-35 to operate in such an environment. Accordingly, the Government approved the development of the Light Combat Helicopter (LCH) by the State-owned HAL in 2006.

Four prototypes of the LCH have completed pre-induction trials and in January this year, HAL declared that the LCH is ready for operational induction after completing all weapon integration tests. The Defence Acquisition Council (DAC) has already cleared the limited series production (LSP) of 15 LCH, ten for the air force and five for the army respectively. The LCH is a multirole combat helicopter with the unique and distinct capability to operate at high altitudes–an advantage over other attack helicopters in the world today. The Z-10 on the other hand, though capable of operating in the mountains has no stated capability of high altitude operations. This was confirmed when last year the Pakistan military chose Turkey’s more expensive T-129 ATAK over China’s Z-10, which they had evaluated earlier and did not find suitable for operations in the Hindu-Kush mountain ranges.

Both Turkey and Pakistan have been operating the American Huey Cobras and the Russian Mi 25/Mi 35 attack helicopters which are old and vintage and have limited or no capability at high altitudes. Pakistan’s efforts to get the latest version of Huey, the AH-IZ Viper (12 numbers) from the Americans have not borne fruit, hence the deal with Turkey for the 30 x T-129 AH, which is presently on hold.

The LCH is a derivative of the weaponised version of the HAL manufactured Dhruv helicopter ‘Rudra’, which is already operational and in service with the Indian army and air force. While the Rudra is basically an armed helicopter, the LCH is a dedicated attack helicopter, capable of operating at high altitudes. The LCH has a maximum weight of 5.5 tonnes, and a service ceiling of 6,500 meters (21300 feet). The design features a narrow fuselage with stealth profiling and armour protection. The helicopter is equipped to conduct day/night combat operations. The LCH has a two-crew tandem cockpit and is equipped with helmet-mounted targeting systems, electronic warfare systems and advanced weapon systems. Notwithstanding the limited production of 15 LSP platforms for the air force and army that has so far been ordered, the final projected requirement, as per HAL, is likely to be 65 and 114 for the air force and army, respectively.

The development of the Z-10 began in the mid-1990s. A prototype of the Z-10 made its maiden flight in 2003. The Z-10 helicopter has a standard gunship configuration with a narrow fuselage and stepped tandem cockpits. The fuselage has sloped sides to reduce radar-cross section. The Z-10 attack helicopter was developed by the Changhe Aircraft Industries Group (CHAIG) and China Helicopter Research and Development Institute (CHRDI) for the PLA. The helicopter is being manufactured by Changhe Aircraft Industries Corporation (CAIC).

The first helicopter was delivered to the PLA in 2009. The Z-10 was displayed for the first time at the 9th China International Aviation and Aerospace Exhibition in Zhuhai in November 2012 –it weighs 5.5 ton and has a stated service ceiling of 6000 meters. It is believed that the design and development of the Z-10 have been secretly assisted by the Russian Kamov helicopter design bureau.

The Turkish T-129 ATAK is a 5 Ton new generation, tandem seat, twin-engine, multirole, all-weather AH based on the famous Italian A-129 Mangusta AH; especially its airframe. Having acquired the license from Italian, Agusta- Westland Company, Turkey has used its own high technology avionics systems, helmet-mounted targeting systems, weapon systems, transmission and rotor blades. The engine, of course, is the American-British LHTEC T 800-4A which is the export version of the engine manufactured by Honeywell and Rolls-Royce. The T-129 programme commenced in 2007 and had its maiden flight in 2009. In May 2014 the first batch of nine T-129 AH was delivered to Turkish land forces. Presently the Turkish military is operating approximately 60 T-129 ATAK helicopters and is looking at the export of this machine in a big way. In addition to Pakistan, Brazil and the Philippines have shown an interest in this AH.

The LCH is powered by two Turbomeca Shakti turboshaft engines (1430 shp each) driving a four-blade main rotor and four-blade tail rotor.  In fact, the Shakti engine has already been tested for its performance in high altitude operations and is being jointly developed by French Turbomeca and HAL.

On the other hand, numerous engines were used during the design and development of the Z-10, to include Canadian Pratt & Whitney PT6C-67C, Russian Klimov VK-2500 from Mi-17 and Ukrainian Motor-Sich TV3-117.  However, with Pratt & Whitney coming under the adverse observation of US federal agencies regarding violation of arms export control act transfer regime, the Canadians withdrew from the Project. The Chinese thereafter with Russian and Ukrainian help, managed to develop their own engine WZ-9. Two of these engines producing 1350 shaft horsepower each, presently power the Z-10 driving a five-bladed main rotor and two-bladed twin tail rotors. However, this engine has proven to be too weak for the 5.5-ton helicopter.

The Chinese claim to have developed a new more powerful engine recently with the help of French Turbomeca called the WZ-16, which they claim will give the Z-10 the requisite high altitude capability. 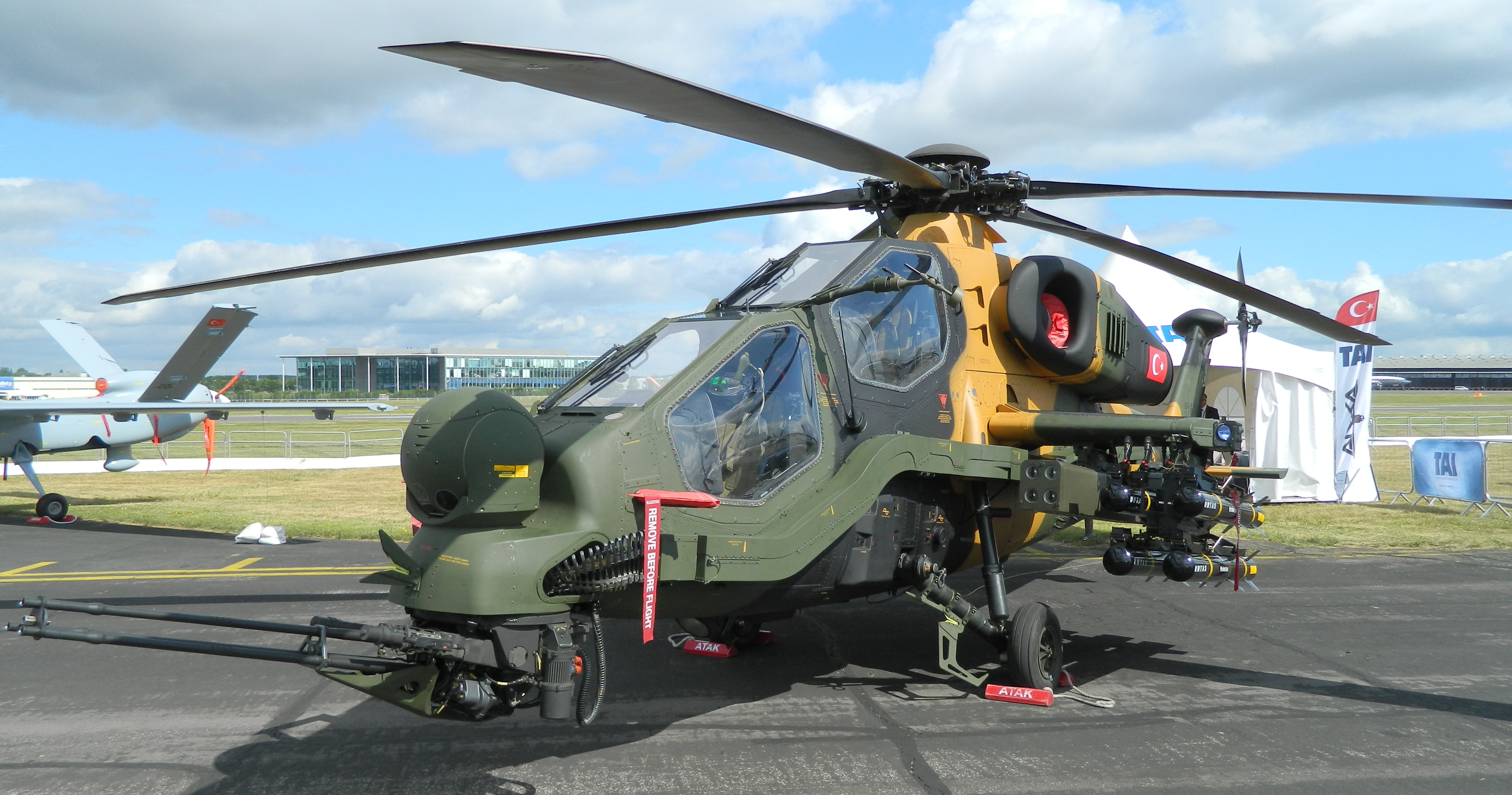 The Turkish T-129 is powered by two LHTEC T800-4A turbo-shaft engines with each producing 1361 shaft horsepower driving a five-bladed main rotor and two-bladed tail rotor – this engine is manufactured under license from Honeywell and Rolls-Royce. As per reports Turkey is also in the process of testing a new engine for the T-129 ATAK to overcome American sanctions for export purposes.

The three AHs have a tandem seating glass cockpit with multifunction displays, a target acquisition and designation system with FLIR, laser rangefinder and designator. The Z-10, however, has a stepped tandem cockpit which accommodates a gunner in the front and pilot in the rear. The cockpits have a varying degree of armour protection and bulletproof glass. The helicopters are also equipped with a helmet-mounted sight, an electronic warfare suite with radar warning receiver, laser warning receiver and a missile approach warning system.  The helicopters are fitted with a data link for network-centric operations facilitating the transfer of mission data to the other airborne platforms and ground stations operating in the network, facilitating force multiplication. The three helicopters are capable of operating in all weather and day/night environment.

Due to their modular design concept, the LCH, Z-10 and the A-129 can be armed with a wide variety of weaponry. These could be in terms of machine guns, cannons, rockets and missiles both air to ground and air to air.  While the calibre and make of the weapon systems and armaments could be different, all three helicopters are capable of carrying all or a combination of armaments and weapons based on the task and operational requirement. The defining feature is the capability of air combat and engagement of UAVs.

The Z-10 and the T-129 ATAK AH are already operational and in service with the PLA and the Turkish land forces, whereas the LCH is slated to enter service this year.  However, going by the comparative analysis of the stated capabilities of the three AH as brought out earlier in the article, the basic configuration and key specifications are almost similar. Even the design features related to the cockpit, avionics, sensor suites and weapons/armament package are similar barring the different types/origin of equipment being used. However, the LCH has an edge in terms of embedded stealth features. The present engine of the Z-10, the WZ- 9 is, in fact a liability, restricting the full exploitation of the combat potential of the helicopter. While the development of the new WZ-16 engine for the Z-10 is likely to give it enhanced weapon carriage and high altitude capability, the results will only be known once the upgraded Z-10 is fully operational.

The A-129 and the LCH, on the other hand, have engines which are tried and tested on other established platforms as well as the current platforms for their high altitude capability. The targeting systems in all the three AH are electro-optical which have similar capabilities, but if Millimetre Wave Radar (MMW) is installed on Z-10 and the T-129, as claimed, it will give a distinct edge for multiple targeting even in adverse weather conditions. However, the MMW radar with the present technology needs a bigger platform like the Apache. This claim/development especially by the Chinese needs to be closely monitored.

The LCH will enter service with the Indian military this year and will need to prove its stated capabilities during the exploitation phase. In the current analysis, the T-129 ATAK certainly scores over both the Z-10 and the LCH being a variant of time tested AH, the Italian A-129 Mangusta. The very fact that the Pak military chose this platform over the Z-10 further corroborates this thought process– however, this assessment could change once the LCH is fielded and justifies its stated claims.