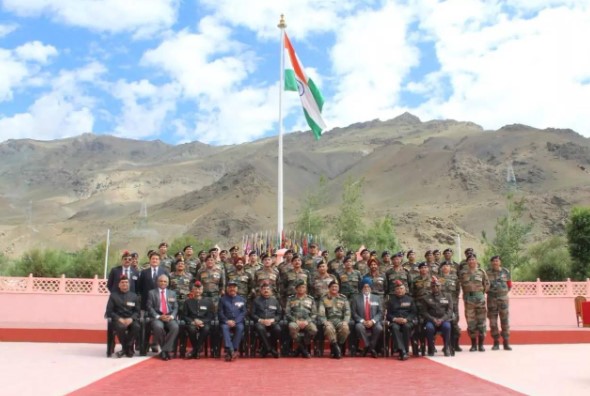 Artillery is the God of War –

The Kargil War Memorial at Dras is a monument of great reverence and ethereal beauty, conceived, crafted, and built with purpose and great reverence. Each of the tombstones there has a unique story to tell – the master epitaph reads, “Some Young Warriors Sleep Here”. The mighty Tiranga (Indian tricolour flag) flutters almost at the centre of the memorial against the backdrop of Tololing, a grand majestic feature. There is tranquillity and peace today all around as people bow in solemn silence.  In another era, these features resonated with the thunder and roar of guns, as the enemy atop was overwhelmed after gory bloodbaths, acts of bravery and sacrifice, leading to victory.

I sat, soaking up the sun’s warmth at those high altitudes on the morning of 30th July 2022 at the War Memorial, Dras. Lt Gen T K Chawla, Director General, Artillery and Senior Colonel Commandant, addressed a small august gathering. Among those gathered were a few senior Kargil veterans, present-day Commanding Officers (Tigers in Army parlance), Artillery Commanders (Bulls) and Senior Commanders present at the event for the renaming of Point 5140 as “Gun Hill” to commemorate the victory of the Indian Armed forces and pay homage to the supreme sacrifice of the Gunners in ‘Operation Vijay’ during the 1999 Kargil War.

The Director General, Artillery, typical of his precise style, poignantly summed it all, steering us through the labyrinth of bureaucratic challenges faced by the Directorate to acquire approvals/sanctions to rename Pt 5140 as Gun Hill. His brief also summed up the narrative of the Kargil flare-up from an artillery perspective. 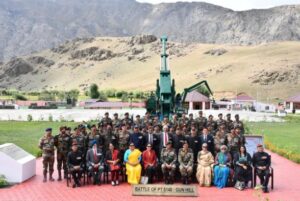 Immersing in vivid and spectacular memories recounted by the then angry ‘Bull’ as he was nick-named, Maj Gen (then Brig) Lakhwinder Singh YSM (code sign ‘Lucky’ to us) and other stalwart Tigers of the artillery units deployed in action in 1999 to include Maj Gen (then Col) Alok Deb, Col Mendiratta, Lt Gen Ranjan (then Col), Lt Gen George (then Col), Col Passi, Brig Mishra (then Col) – to name a few.

To recall a few facts as I analyse them, the adversary had occupied multiple dominating features – Grounds of Tactical Importance – on our side of the LoC overlooking the highway to Ladakh over a frontage of almost 45 to 50 km. They had dishonoured the provisions of the Shimla Accord. The accord enabled both nations to practice winter vacating of posts on either side to avoid inhospitable high-altitude terrain and extremely cruel and excruciating winters. 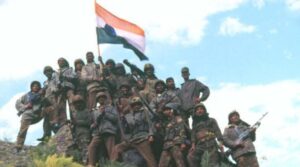 The enemy’s act of seizing our posts in the summer of 1999 was clear. It was to interfere with the movement of Indian logistics convoys carrying winter stockings to Ladakh by choking the national highway in the general area of Dras. The objective was to deliver a debilitating blow to India’s established military superiority in the area and the glacier beyond. Further, the aggressors felt a debacle for India in this region would lead to a steep increase in terrorist activities in Kashmir Valley. The overarching idea was that the disturbed state would force the world to intervene in Kashmir Valley, thus diluting the Indian hold.

For India, as far as the loss of territory was concerned, it was entirely an unacceptable situation.

For the Indian Army, it was a moment of reckoning, the moment to fight and win.  Once the Kargil intrusions were confirmed, the entire country looked up to the Armed Forces for retribution and victory. The Infantry, in particular, had a very tall order. For them, it was regaining lost posts, even if it required brutal, macabre, ferocious fights at high altitudes; literally suicidal. A foreboding of death and failure hung heavy in the air. Victory looked like a distant dream. A pall of gloom hung thick after a few failed attacks. The enemy was well entrenched, dug in and ready for a long bitter fight.

It was then that sometime in the first week of Jun 1999, the Gunners rose to the occasion.

In the Indian camp, the adverse moment nurtured the boldest and most innovative techniques for delivering Artillery fire in recent times. The Gods of War directed fire assaults so potent that the enemy was down on his knees. Our Infantry could walk to the fortified positions and mop up.

There were challenging impediments, though, especially poor or no maps. Air observation post cover was as good as not there; lack of good anchor Observation Post Officers in the ranks of the reinforcing artillery because of their lack of exposure to the topography and terrain, unskilled drivers – the list was endless!

Units were deployed in the open with as much crest as possible while being able to simultaneously engage at low angles, maintaining equipment, preparing ammunition with bruised arms and raw palms, stinking from the sweat and burning under the high-altitude sun, with just as much food as was required to keep one going! Nothing could stop the Gunners.

Under these hard, difficult, challenging conditions, Bull, 8 Mountain Artillery Brigade, swung into action. It quickly congregated its few good men to conceive a plan. In the next few days, in makeshift bunkers and over steaming black tea, the greatest and most potent of Fire Plans was prepared by arduous, skilful, and remarkable Artillery Tigers for the siege of Tololing.

Seasoned Anchor Observation Officers (one of them being myself) climbed to occupy features adjoining enemy-held positions with utter disregard for their safety. The sole aim was to acquire, register and map enemy localities to deduce technical data for a Fire Plan to liberate Tololing and other key posts.

Innovation metamorphosed to a new scale and level – Indirect Direct firing, multiple roving positions with multiple ammunitions, bunker bursting by single guns, precision shoots, witness point procedure for the poorly mapped areas, the corrector of the moment for sites other than the target to retain surprise, massed artillery fire assaults, barrages—super close wheel-to-wheel deployment for tight concentrations and minimum displacement. Name a procedure in the book used with elan, passion and dexterity.

Once registration was complete, the sixteen-odd Artillery batteries opened with their arsenal of 100 plus guns firing varied ammunition in a waltz of loading and firing by hundreds of nimble gunners in action, round the clock. Cordite, the dust, and the smoke bore the smell of perdition as the ground itself trembled.

Folklores recall that demons such as Beelzebub, Aamon, Resheph, Mephistopheles, Narakasura, and Mahishasura trembled in fear and took to their heels when they were in distress. The opera of the guns was like the re-enactment of the burning of Dioscorus of Ancient Nicomedia – the atrocious demon who beheaded St Barabara, the patron saint of Gunners. The wisp of fire blazing from the flash hiders of the howitzers seemed as if the mighty Hanuman himself had set the tails of all demons on fire to burn in hell. Those who witnessed the artillery assaults at Kargil would never forget the synchronised symphony of gunfire in their lives.

Annihilation danced on the peaks as adversary warlords wept in the inferno of the attacks evident from the howls and shrieks that echoed as blizzards bounced off the high mountains. The desperate radio intercepts of the enemy bore witness to their fear and destruction being delivered at their posts. Our troops sang a different note – “Yeh Dil Maange More” (this heart desires more).

One stronghold after another crumbled and crashed owing to the onslaught of our guns while our Infantry climbed and assaulted whatever remained of the enemy in those positions. It’s in these periods of intense ground action that the peace-time divisive lines between combat arms and combat support arms blur and vanish. It was through and through a team endeavour. There were instances when the Infantry company commander leading the attack became a fatal casualty, and the Artillery Observation Post Officer took over command and went through the attack successfully.

The Indian Artillery fired over two lakh fifty thousand shells in the general areas of the Kargil/Dras/Batalik/Mushkoh sectors within a span of fewer than two months.

Twenty-two years since, and hundreds of pages of staff work later, the leadership has been magnanimous in renaming Pt 5140 as ‘Gun Hill’, an objective whose capture was solely on account of the effect of the wreckage caused by the “Indian Topkhana”. The solemn renaming ceremony on 30 July 2022 at Kargil was spectacular.

Let us not forget those gallant, brave souls who sleep beneath the ground there, having made the ultimate sacrifice to help us hold our heads high.

We, the artillery men will live and die by the Guns we man –

Lt Col Sada Peter, a second-generation officer was commissioned in 212 Rocket Regiment in 1989. He has served with Army aviation, held staff appointments in Brigade HQs and Army Headquarters and opted for Premature Retirement (PMR) in 2010 after which he had successful stints with Jet Airways and Tech Mahindra Foundation. He is presently the Head of Security/Emergency Response with Ashok Leyland at Chennai.