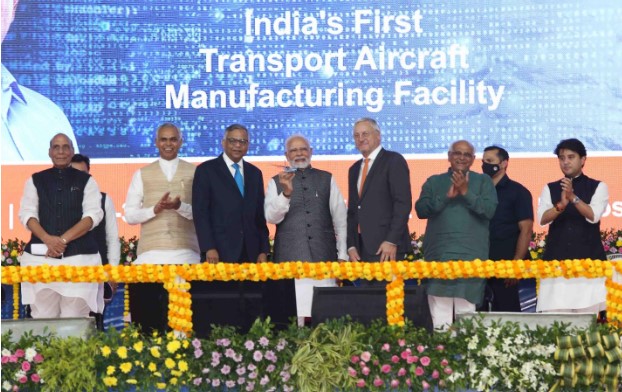 After laying the foundation stone, Prime Minister asserted that India would emerge as a major manufacturer of transport and commercial aircraft in the future that would meet domestic requirements and cater to the global market. “The transport aircraft that’ll be manufactured here will not only give power to our military but also develop a new ecosystem of manufacturing aircraft… Soon, India will witness the passenger aircraft that will be made with the tag of ‘Make in India’ and ‘Make-for-World’,” he said. The PM added that the manufacturing facility has the power to transform the country’s defence and transport sectors. He pointed out that it is for the first time that this big investment is taking place in the Indian Defence sector. 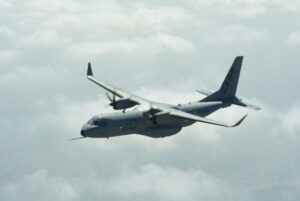 Further, the Prime Minister reiterated, “in the coming years, the Defence and Aerospace sectors will be two important pillars for making India ‘Atmanirbhar’. By 2025, our defence manufacturing scale will cross $25 billion. Defence corridors being established in Uttar Pradesh and Tamil Nadu would power this scale.”

This is the first project of its kind in which a private company will manufacture a military aircraft in India. The aircraft can be used for civilian purposes as well. Apart from making 40 aircraft, this facility at Vadodara would manufacture additional aircraft for Air Force requirements and exports.

In September last year, India sealed a Rs 21,935 crore deal with Airbus to procure 56 C-295 aircraft to replace the IAF’s ageing Avro-748 planes that entered service in the early 1960s. Under the agreement, Airbus will deliver the first 16 aircraft in ‘fly-away’ condition from its final assembly line in Seville, Spain, within four years, and the subsequent 40 aircraft will be manufactured and assembled by Tata Advanced Systems (TASL) in India as part of an industrial partnership between the two companies. The aircraft built in India will be supplied from 2026 to 2031, and the first 16 fly-away aircraft are scheduled to be delivered to the IAF between September 2023 and August 2025.

The project is expected to generate 600 highly skilled jobs directly, over 3,000 indirect jobs, and 3,000 medium-skill employment opportunities with more than 42.5 lakh man-hours of work within the aerospace and defence sector.

The C-295MW is a transport aircraft of 5–10-ton capacity with contemporary technology. The plane has a maximum speed of 480 kmph. The aircraft can perform special missions and disaster response and maritime patrol duties. The aircraft can airdrop paratroops and loads and be used for casualty or medical evacuation.