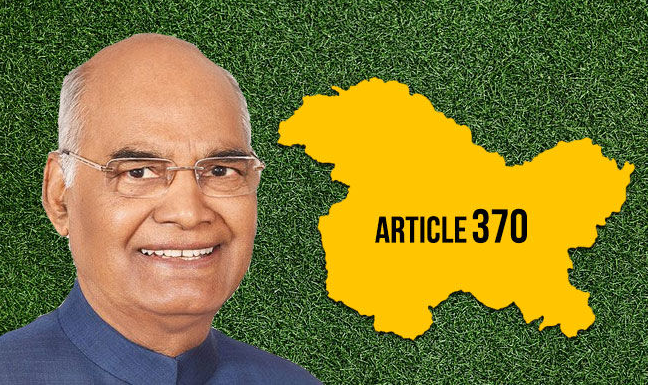 President Ram Nath Kovind has declared abrogation of the provisions of Article 370 and its subset 35 A of the Constitution, which gave special status to Jammu and Kashmir on August 6. The move came after both Houses of Parliament passed a resolution in this regard. The Jammu and Kashmir Reorganisation Bill that bifurcates the border state into two Union territories secured Parliament’s approval on the same day with the Lok Sabha passing the new measures with an over two-thirds majority. It was a joyous moment for most Indians, and the TV beamed images of celebrations across the country, especially the Jammu region. The Legislation was historic in its own way as while it was on BJP’s manifesto, no one thought that they would make it transform it into a reality.

The combination of Prime Minister Narendra Modi and the Home Minister Amit Shah were the chief architects, planners and executioners. Many MPs in the Parliament said, that without their resolve the Bill would never have been introduced, let alone be passed. They sensed the need, found the right time and the opportunity and they grabbed it.

However, this piece is not about the passage of the Bill, nor about its being right or wrong for India, though that’s a crucial issue and has been debated and will continue to be debated in and outside Parliament. This piece is about whether we as Indians need to show restraint and not assume that passage of the Bill through the two Houses of the Parliament in itself is a victory.

The passage of the Bill was the easiest part of the whole exercise, the difficult times would follow ahead. The points in favour of the argument raised above are articulated below.

The government has come under severe criticism on the manner in which it surreptitiously, as some parties called it, passed the Bill in the Parliament without even allowing the stakeholders to know let alone debate on their future status. The Valley was under curfew-like conditions with internet and telephone services blanked out. Most rational Indians would agree that this may not have been the best way of going about getting the Bill passed. But anyone who is preview to the way things work in the Valley would also know that the government could not have taken a chance of informing the political stakeholders in the Valley of their intentions in advance for fear of the Valley erupting in large scale demonstrations in anticipation of the impending attempt to do what the government has done.

It may be prudent to concede that while it may not have been the right way but possibly it was the least violent way. Putting the party leaders under preventive custody and keeping them in the dark and lying to them before the event is all part of the same exercise. Imagine the Valley burning while the Bill is being debated in the Parliament. The opposition to the government would be far more not only from the dispirited Congress but the international agencies and even agencies inside our country. Yet all of us know that the restriction on the population cannot be imposed beyond a finite time. Once it ends, the population of the Valley would have to be assuaged as they would see it as a monumental wrong perpetrated on them.

The emotional scars would exist and there would be a need to put the balm on them with compassion if we would like them to be part of this exercise. The multiple shocks of losing the special status and being downgraded to a Union Territory (UT) would be hard to come to terms with.

Let’s define when can the government of India claim that it has successfully integrated the state of Jammu and Kashmir with the rest of India or when the political realignment of the newly created Union Territory is in sync with rest of the country and the political process is complete.

On the ground, it would mean, there are elections in the union territory of Jammu and Kashmir and there is an elected government with its legislative assembly. This step is going to be the most difficult for the central government. The government can try to fulfil all its promises with utmost sincerity of improving the economy, the creation of jobs, and bring prosperity to people, as these mechanisms lie in their hands. However, what the government may not be able to steer is control over the political process in the valley.

Imagine a situation when the Election Commission announces elections in the UT of Jammu Kashmir in another six to twelve months. While Jammu would be fully enthusiastic, there would be no takers in the Valley. To expect National Conference (NC) and Peoples Democratic Party (PDP) to join the electoral process in the next elections when their leaders were arrested and more importantly expect them to share power in a diluted UT environment where the Chief Minister cannot move an inch without the permission of the Lieutenant Governor is like expecting a one-legged man to win the long jump competition.

If human behaviour is a dimension to be considered, then their desire to avenge could manifest in their opposing a political process to take place in the valley. They could leave no stone unturned to achieve that, including colluding with the separatists and the enemy.

With such a possibility, the government would either have to raise a new entity who would fill up this political vacuum or somehow coerce these same political entities to take part in the electoral process. While the former is possible the later seems impossible unless there has been a tacit understanding that the government has already reached with some parties well before the Bill was tabled. In the absence of a proper political process, the integration of the valley with the rest of the country will be far from being complete.

The extraneous factors such as Pakistan’s attempt to subvert this process by fomenting trouble in the Valley by any means available to its armed forces including unleashing of the Jihadi elements are a cause for worry. However, our armed forces can neutralise the threat to a large extent. Yet, their influence on the elements in the Valley cannot be underestimated. They would influence the anti-social elements to extract maximum leverage to create trouble for the dispensation to be in the Valley. If this is the grim reality that faces the government, it sure is a cause for worry. It’s definitely not the time as of now to open champagne corks in our drawing rooms or sweets being distributed in party offices.

Is there a ray of hope? Yes, there seems to be and it originates from the fact that the support to the old political establishment is likely to be confined to old townships of Anantnag, Sopore and Srinagar, mainly, the and to a limited extent to Baramulla and Shopian. In balance of the Valley and the villages, there would be an upsurge in the support to the new initiatives.

Another silver lining would be lack of funds available to the separatist parties and their support elements which was a major factor in mobilising the stone pelters and trouble creators. If the new dispensation intelligently uses these potential positives, then they can wean away, slowly but surely, substantial elements into constructive avenues.

It is a long haul, and the journey has just begun. The rest of the country will do well to understand that their support in winning the hearts and minds of the people in the valley would be crucial. Any extraneous display of exuberance, arrogance and anxiety to celebrate are likely to alienate the population faster than any Pakistani propaganda. The victory would come surely but after all of us have contributed to that effort with our hearts and mind and without thumping our chests.