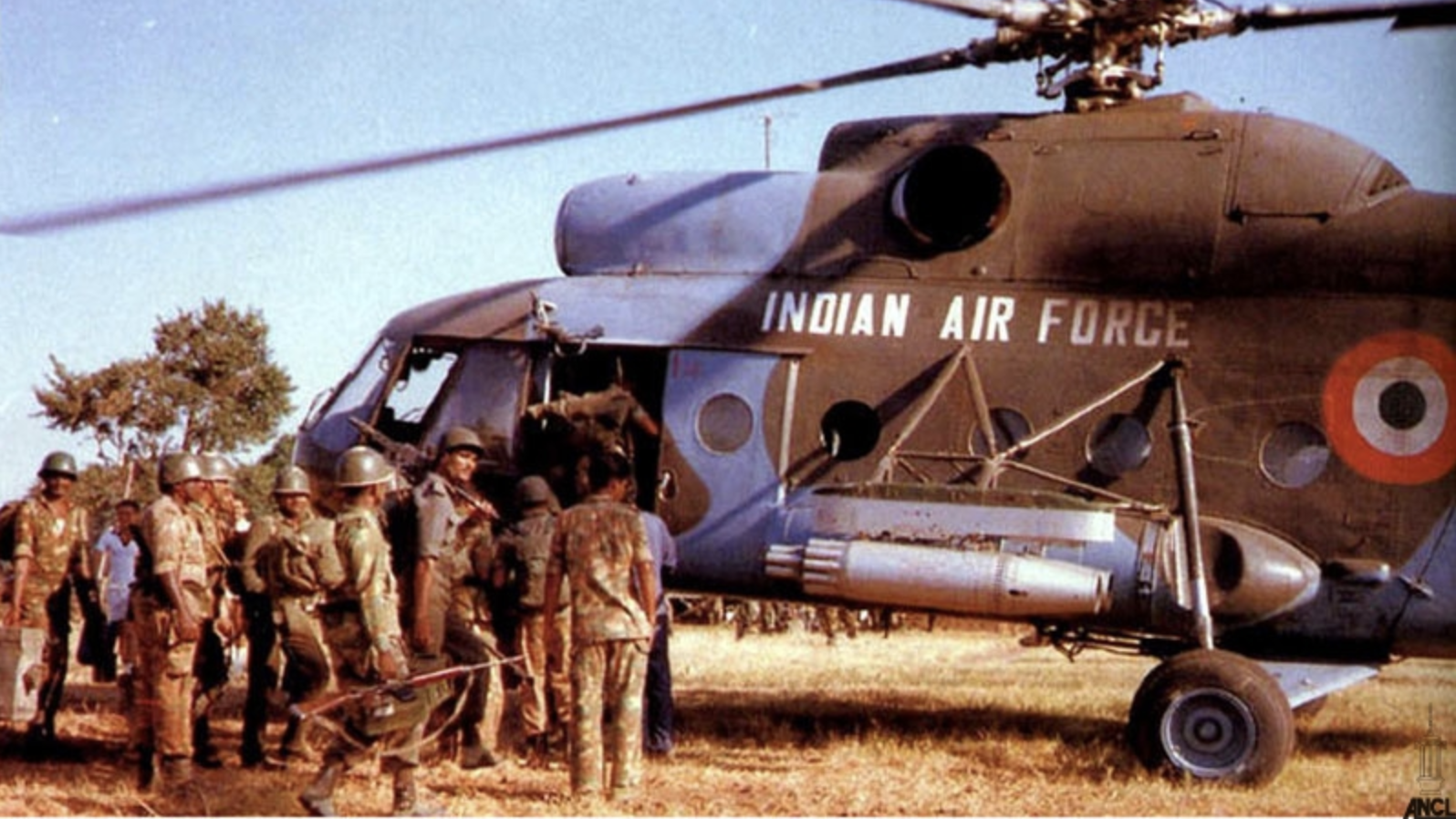 This article is the concluding narrative of the three-part series covering the Indian Peace Keeping Force’s operations in Sri Lanka. The author has already dwelt upon the shortcomings in the previous parts (Part 1 & 2). In this part, he highlights flaws in some additional areas and recalls specific examples of such deficiencies.

The interference from higher authority was constant and unvarying.   The IPKF entered the arena in 1987 with tourist brochures and shrugged shoulders. What a come down from the meticulous grooming, planning, training and readiness demonstrated in 1971. Many senior and middle level commanders of 1971 war were dismayed at the visible lack of professionalism.

Was anyone serious about this? I was asked about this by a young Major at dinner in Chennai. The Maratha battalion that went in there early, was given some contrary and convoluted instructions. One day, the then Commanding Officer (CO) who now lives in Kerala, may divulge his story someday. One fact was clear, the powers that be, both military and civilian were guilty of disregard for the lives they put in the firing line and eventually 1200 of such lives wasted.

The enemy was not clearly identified neither was his ability to cause devastating damage to Indian forces ever considered during the launching of operations. Were any appreciations done at all? Was the IPKF ever war-gamed?  How do you war game a plan when the enemy is not defined? The supreme overconfidence of the few, completely subsumed caution and the need for reappraisal, as the time for induction crept closer.

The absence of sincerity before, during and after the operation is followed by amnesia. There is no genuine desire to force both civilian and military leaders of today to intellectually analyse where we goofed up, how often we erred, what induced the callousness and why those who could bring sanity into the whole game remained silent or were made to shut up? A few examples of the lack of seriousness would be pertinent.

The Missing Missile and Vertical Envelopment

One morning in October 1987, I was at Madras international airport loading a T-72 tank into an IL-76 for Jaffna. The previous day we had inducted T-72s into Jaffna and Trincomalee.

During the loading, I was called to a telephone to speak with IPKF HQs in Madras. The Officer at the other end wanted me to change my profile of Approach and Landing at Jaffna when I went in with this T-72. The HQ did not want me to make a normal approach starting at 600 meters above ground at a distance of about six km from the runway, but descend to 100 meters above ground at 6 km and land off that approach.

Jaffna has a short runway with gravely surface resulting in inefficient braking. One had to touchdown at the beginning on the airstrip to stop within its length. We had been doing it ever since IPKF induction commenced. To touch down at the beginning, the pilot of an IL-76 must see the runway at a distance of at least 3 km so that at a speed of 250 km/hr, he gets about a minute to align and stabilize the approach and make a correct touchdown at the beginning of the RW. The IL-76 with the T-72 would be landing at 150 tons, 10 tons higher than the maximum permitted weight.

I explained all this to the HQs and added that the IL-76 has a wingspan of 50 meters, I cannot see the wingtips from the flight deck, the aircraft is 47 meters long, its16 wheels are 20 feet below me. At 100 meters above ground, I would be avoiding birds with violent turns, worse, I would see Jaffna runway from just about one kilometre before touchdown, with no time to re-align with the runway, and with my violent turns to avoid birds I would certainly be misaligned with the RW.

I finally asked him why I should do such a crazy approach.  He answered that the LTTE had three Shoulder-Fired Anti-Aircraft missiles. Apparently, they had fired one at a Sri Lanka Air Force aircraft and missed. The IPKF had found the third, but were unsure where the second one was, and were worried that LTTE may use this to shoot at an IL-76 or AN-32.

This information naturally unnerved me to no end. Finally, I asked a direct question, “Sir, should I then fly into Jaffna or not?”  Guess his answer, “I am not telling you not to fly to Jaffna”. It was 1987, I served till December 1993, today it is 2020, I have never heard about this missile threat from any other pilot in these last 30 years.

One does not intervene in another country, even on an invitation, sans earnestness to do it right – we were far from serious. In 1987, 40 years after independence and four wars, the Indian Army was a thoroughly seasoned military machine with much insurgency expertise. Why and how did this Force and its leaders fail in Sri Lanka? How was the inherent passion of the Indian Army for military preparedness; get smothered and overwhelmed?

Another hare-brained proposal was the capture of Trincomalee airport by dropping paratroopers in case the LTTE takes control of the area. Trincomalee runway is aligned 060 / 240 degree, with the sea in the East, West, South West and jungles to the North. The approach of runway 06 has a tall tower 2 km short of it from where one can observe all landing aircraft and fire at them. Tall Derricks were located just short of the beginning of runway 06.  The plan reveals incontrovertible evidence of overconfidence and absence of appreciation of employment of airborne troops to capture runways.

Trincomalee was fully accessible by ground to IPKF, retaking the airport from LTTE would have to be a ground-based attack. The plan gave the impression that a land-based attack was impossible to plan or even execute, which was false. Just because there are maroon berets in Agra, and the IAF has aircraft that can drop them, and because we have not done an offensive para-drop since 1971, we must do it now?  Did someone forget that paratroopers can also walk? Besides, look at the certainty of most paratroopers landing in the lagoon which surrounds Trincomalee airport. Observe the extreme vulnerability of IAF aircraft to all kinds of heavy and small arms fire, from vantage points which the LTTE would most certainly exploit.

Did not the events in Jaffna University in October 87, deter such planning and thinking? This was a haughty posture which would definitely result in heavy casualties. Was it proposed just to prove that the Commander is not frightened to commit troops to battle, and so you can plan a suicidal operation? There have been many observations by non-military experts that the Generals were not willing to take on the LTTE. These so-called ‘experts’ swiftly, shamefully and handily forgot that it is they who had tied the Left Hands of the IPKF generals to Their Left Thighs, by neglecting to ensure that the Accord strengthened the Indian Army, and not the Tamil Groups and Sri Lanka Army.

This confidence was to manifest again in a non-executable plan to drop paratroopers in Northern PoK on the other side of the Siachen glacier to capture Pakistani positions at 20,000 feet in the Himalayas. This attitude would also encourage a plan to para-drop troopers, on a moonless night, in the island archipelago of Maldives.

Both plans completely in-executable, tactically suicidal and strategically fallacious. We were certainly not sincere during IPKF and demonstrated that callousness many times later too. How did this come about in an Army that has a grand legacy of more than 200 years? An Army that has more battle honours and captured Flags, than many other military forces around the world? We need to remedy this malaise before it consumes us. Is it still there in certain military quarters, among veterans, among the armchair strategists, politicians and the ill-informed bureaucrats who take on the mantle of defending India?

Everyone, even remotely associated with IPKF, would accept that there are lessons for all departments of government. It is not late, even now to dissect IPKF and extract lessons. India has the largest military force in the region. We need to behave in consonance with this reality. The face-offs with China will remain. Pakistani mischief will continue indefinitely. Maldives, Nepal, Sri Lanka, Bhutan, Myanmar, Bangladesh, Seychelles, Indonesia would keep us on our diplomatic and military toes, even if it is to tell us not to take them for granted.

Our ‘ego’, which surfaces with irritating regularity against our small neighbours, has been the proverbial ditch into which our diplomatic-military-economic efforts fall. Our neighbours have experienced our haughtiness. Witness the Maldives ignoring India in the February 2018 crisis.

A highly sensitive military adventure like IPKF should not have started without war gaming and dedicated planning, and we had the time to do that. The disdain for the lungi clad LTTE fighters resulted in engraving 1200 names on marble tablets. Our attitude must change, at least to honour those Indians who fell for Sri Lanka in Sri Lanka.

To quote President Kennedy, “A nation is known not by the men it produces, but by the men it honours”. Sadly, India has not honoured her worthy fallen sons.