The terrorist violence in Jammu and Kashmir has reduced significantly after the abrogation of Article 370 in August 2019 owing to better control of the overall security situation in the region, revealed a source at the Northern Army Command of the Indian Army. The Valley witnessed 44 terrorist encounters in 2021 compared to 163 in 2019 and 213 in 2018. In 2020, 244 terror incidents were reported in which 221 terrorists were killed. The killing of civilians in terror-related incidents and deaths of security personnel have also gone down in the same period.

Incidents of stone-pelting cases have come to nought. “There are almost zero stone-throwing incidents and business is back to normal with the tourism industry opening up,” the source disclosed. For the safety of people living along the Line of Control (LoC), 8000 bunkers have been constructed out of the targeted 15000 bunkers last year, and work is in progress to complete the rest of the bunkers, it informed.

With a relatively secure environment that is prevailing today in the Valley, youths are channelizing their energy towards growth-oriented developmental projects instead of falling prey to Pakistan sponsored-radicalization and terrorism. Abrogation of Article 370 has enabled an improved security scenario and ushered in a new phase of socio-economic development in the region.

Around two years after the abrogation of Article 370 and the state being bifurcated into two Union territories of Jammu and Kashmir and Ladakh, the decision has led to all-round socio-economic development activities in sectors such as road, rail, power, health, tourism, agriculture, horticulture, skill development, etc.

Construction of road network and groundbreaking projects for rail network have gathered pace at a massive scale since the change in status of the region. Construction of Jammu bypass, Jammu-Udhampur section, Chanini-Nashari tunnel, Lakhanpur-Hiranagar, Hiranagar-Vijaypur, have been completed. The ring road around Jammu, Udhampur-Ramban, Ramban-Banihal, Banihal-Srinagar and the Qazigund-Banihal tunnelling project are in progress at a fast pace. The project costs amount to Rs. 8000 crore.

The long-pending Udhampur-Srinagar-Baramulla rail link worth Rs 21,653 crore since 1997 has picked up the pace and will be completed by 2023. The highest rail bridge in the world will also be completed soon on the Chenab river under the project.

The Rs 5282 crore worth 850-MW Ratle hydroelectric power project in Jammu and Kashmir, work on which was stalled for the past six years, has been revived. The hydroelectric project is a run-of-the-river scheme located on river Chenab in the Kishtwar district. A total of 270 projects at a cost of Rs 12,972.12 crore are under execution in 17 districts of J & K with an average value of Rs 48.04 crore for each project. Most of the projects will be completed during the financial year 2021-22, according to the government of UT.

The project is expected to augment the existing generation capacity in the region. Cumulatively, the upcoming power projects will generate 6298 MW at the cost of Rs 54,593 crore, thus substantially enhancing the generation capacity in the region. Giving details of the ambitious power scenario of the UT, Lieutenant Governor Manoj Sinha said that, “It has taken us 40 years to reach the capacity of 3000 MW power generation. I assure that the target of the next 3,000 MW will be reached within the next four years. All options will be explored to make Jammu and Kashmir self-sufficient in power.”

The Healthcare scenario of Jammu and Kashmir is looking up following the new constitutional arrangement brought in after the 5 August, 2019. The AIIMS projects are progressing at full speed, to be completed by 2023 in Jammu and another in Kashmir by 2025. Setting up two medi-cities in Jammu and Kashmir with an AIIMS in Jammu at Vijaypur, District Samba and another in Kashmir has encouraged large private investors in the health sector, corporate houses and hospital chains like Apollo, Medanta, Hindujas and others to invest in the region. The UT government has allocated Rs 1268 crore for the health sector this year compared to the allocation of Rs 350 crore before the abrogation of Article 370. 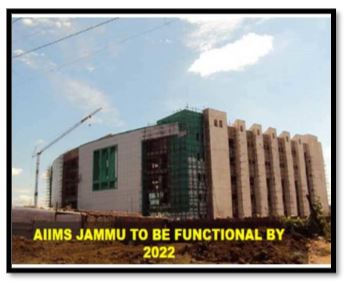 Two COVID-hospitals developed by DRDO are up and running in Jammu and Srinagar with the capacity of over 500-beds to deal with the ongoing pandemic. 30 new oxygen plants are being set up in remote areas of J&K to ensure readiness even in far-flung areas, keeping the third wave of COVID-19 preparedness.

With the launching of premier educational institutions such as AIIMS, IIT and IIM, J&K is the only state in the country that has all these three world-class institutes in one state/UT. Seven new medical colleges have been rolled out in the last three years of which four are already functional. Seats have been increased from 500 to 955 in medical colleges and 25000 seats in regular degree colleges in 50 new colleges. Besides, two IT parks have been set up for Biotechnology in Kathua and Handwara.

According to the UT government, 27000 new posts for teachers were created in 2019-20 and 50000 new posts in 2020-21 with a total allocation of Rs 2000 crore. Rs. 1500 crore has been allocated for Pradhan Mantri Gram Sadak Yojana (PMGSY) in 23000 panchayats benefitting 4 lakh workers. 2000 accountants have been recruited at gram panchayat levels to ensure an empowered system at the village level.