What is a domain?

“Critical macro maneuver space whose access or control is vital to the freedom of action and superiority required by the mission.”

“The sphere of influence in which activities, functions, and operations are undertaken to accomplish missions and exercise control over an opponent in order to achieve desired effects”

“A domain is a space in which forces can maneuver to create effects.”

War was confined to three domains for long – land, air and sea. Forces operated largely in their domains. The predominant Service controlled the domain. Cross-domain operations meant ‘supported’ or ‘coordinated’ actions under the dominant Service. Nuclear warfare emerged but was sidelined by deterrence theories. Gulf War and the ‘Air-Land Battle’broughtJoint Operations to the fore. Communications, command, control, computers, intelligence, recce, surveillance, data and electronic warfare were the keys of Joint Operations. Depth battle, simultaneity and non-linearity came into the lexicon of operational jargon. However, warfare was still simple and conventional with a nuclear overhang.

RMA to DMA to Multiple Domains

The first Gulf War set of a Revolution in Military Affairs (RMA). Alvin Toffler teed off the ‘Third Wave’ which challenged the ‘Nation-State’. Knowledge and information became deployable tools of power. The RMA was all about the information revolution, emergence of non-state actors and an indefinable omnidirectional front. The unaffordable ‘Star Wars’ program recognized space as the next domain. Nuclear concepts were refined. Hybrid war arrived through non-state actors, multinationals, radicalization, politicization and commercialization of the battlefield. Simultaneously there were sociological changes due to knowledge economies, urbanization and globalization. Hard and soft power were propounded as tools of state power. The reality that battlefield victory could result in political defeat dawned.

Around this time two Chinese colonels propounded the concept of unrestricted war. With the arrival of AI, AR/VR, Robotics, Big Data Analytics, Cyber Technology and other disruptive technologies we have entered an era of Disruption in Military Affairs (DMA). This term is yet to gain acceptance, but it will, inevitably. Americans and in specific the US Army foresaw the oncoming expansion of battlefield domains. The perception was that land, air, maritime, and space domains being physical could be understood. Cyberspace, information environment, and the electromagnetic spectrum were non-physical and difficult to understand. However, operations from these domains opened an enemy’s critical vulnerabilities. They could not be ignored.

US Army formulated the concept of the multi-domain battlefield. If the battlefield was multi-domain and operations were joint, Multi-Domain Operations (MDO) were not far behind. Serious thinking on MDO has started with an interservice tug of war in the USA. The US Army put a theory forward. The USAF feels that MDO is more of synchronization of application of forces across multiple domains and the US Navy is somewhere in between. Familiar story eh? However, MDOis here to stay. It is an extension of DMA. USA is going through the evolutionary process in MDO. That is the sensible thing to do. Incremental progress through experimentation, dialogue, debate, brainstorming and experience. However, it is worth considering the revolutionary way to MDO through a de-novo holistic look. While one may criticize it as a woolly-headed fantasy leap, it has its merits. The oncoming DMA will drive MDO. It is a matter of time. The semantics may change but the fundamentals will not.

What is MDO? Clausewitz’s dictum that “war is politics by other means” and its converse that “politics is war by other means” encapsulates the entire spectrum of MDO. Multi-Domain Operations can be defined as conventional and/or non-conventional ops carried out by state and /or non-state actors using hard and/or soft power in the domains of air, land, sea, space, cyberspace, nuclear space, information environment and electromagnetic spectrum for specified outcomes in war or peace. This is depicted in the graphic below and bears explanation. 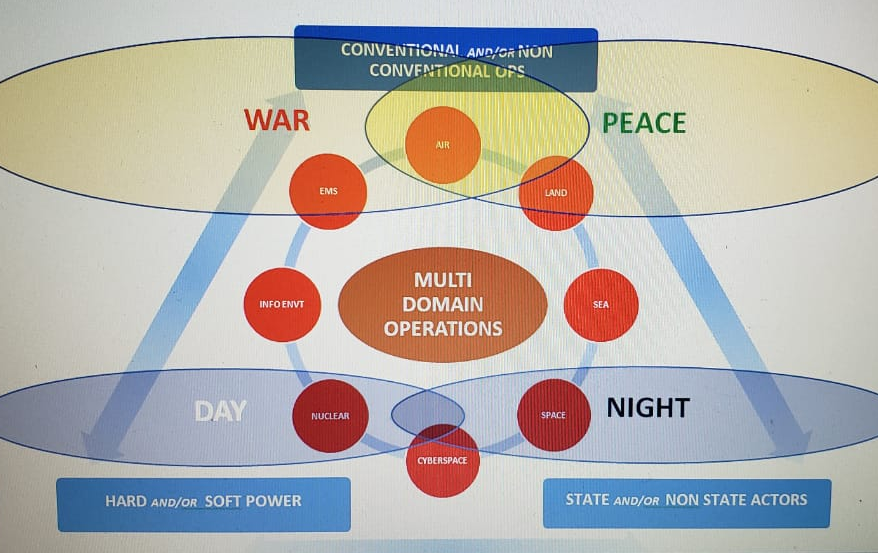 In today’s world of fluid geopolitics, there is neither peace or total war. Conflicts of various degrees are raging across various time zones by day and night. Most countries of consequence are involved in 24×7 conflict scenarios of various shades,365 days of a year. For some nations, these conflicts are multiple- internal and external to their boundaries with large correlativity. The conflicts could be conventional and/ or non-conventional in nature. The States must contend with other State and/ or non- State actors as friends or foes. Lastly, hard power alone does not resolve conflict anymore. Employment of soft and hard power in the correct mix is the norm. This concept is best grasped from the perspective of a state ranged against state and non-state actors across various domains.

While conventional domains of air, land and sea will continue to rule the roost, other domains have emerged where operations must be executed. Cyberspace is now accepted as the new domain. It is virtual in nature, expanding geometrically and is touching the lives of people very intimately through extensive digital networking. Conflict and competition potential in this global domain is already high. Space once considered prohibitive is re-emerging as a viable domain. Exploitation and competition in space are heightened due to a huge updraft in locational, surveillance and communication technologies. Nuclear warfare is separate from other forms of warfare. Many nations have separated their strategic forces from conventional forces. Thoughts on the use of nuclear energy are refining since it is a well-established energy source in a depleting scenario.

The nuclear country club is expanding. Nonstate actors are getting into the act. Revisionist countries like Pakistan and North Korea blatantly proliferate. Harnessing Thorium is the impending nuclear revolution. Nuclear space is now a domain and should be treated as such. Information and the Electro-Magnetic Spectrum have always been used in the conflict. These spaces have attained domain status since many conflicts are being fought exclusively through them. Sometime in the future, climate change and resource depletion will emerge as the next generation domains. Already their effects are triggering and shaping conflicts.

Do the current Joint Structures and organizations of the Armed Forces cater to MDO? The present-day structures cater to the conventional physical domains and the historical military mindset. Normally, the current structures should be expanded organically to encompass the new domains. However, the dichotomy is that the new domains are technology-driven; about which the conventional military mind does not have a grip on. The result is that if these domains must be hosted on existing military structures, then the militaries must equip themselves with adequate knowledge or the structures should evolve with a significant civilian presence. This is complicated since the new domains are dominated by the youth who are not in tune with military thinking. This dichotomy must be resolved. Each country needs to plough its own path forward. There is a significant issue for India. We have very few joint structures in place and hence we have no base to build on. On the other hand, it is an opportunity. We can evolve suitable structures for MDO without the baggage of the past. However, the danger and reality in India would be not doing both i.e.neither have joint structures nor evolve MDO related structures.

MDO must be very fluid, dynamic, calibrated and nuanced. Under normal conditions, most operations will be carried out on low thresholds of violence and physical conflict. Also, the effect of openingand progressing operations in virtual domains is entering uncharted territory since the domino effect of these actions are not known. The unintended consequences could be overwhelming to own sides. Controlling their spread will be a challenge. Hence it is very important to appreciate the basics of MDO.

Multiple domains have caused the battle spaces to expand. They have now become more fluid, dynamic, lethal and hyperactive. Further, nation states face complex strategic environments due to geopolitical, cultural and technological factors. This is complicated by adversaries who are state or non-state. Adversaries often act in one domain and seek a domino effect in others for an undecipherable end state. Hence, there is a requirement to possess capacity and capability to contend adversarial actions across all domains. Contesting adversaries implies the denial of a domain(s) or domination of a domain(s). Denial could be physical (of an area) or virtual (of access). Alternately or simultaneously, there is a necessity to dominate other domains to impose an unacceptable penalty on the enemy.

This leads to the requirement of convergence. Convergence means coordination, cooperation, optimization and synchronization of effort in various domains so that the enemy is outmatched or overmatched by resultant force multiplicative actions in desired domains. Convergence for overmatch will be time, area and domain-specific since the enemy also can morph into other domains to get back at us. Hence there is a great requirement of calibration and nuance the effect so that tactical, operational and strategic standoff is achieved. Standoff refers to the ability to dominate the adversary in desired domains (politically or militarily) without being affected by him so that there is freedom of action for manoeuvre across desired domains. So much for the basics.

The Need for MDO in the Indian Context

The question which we need to pose ourselves is that is MDO a requirement for India or is it part of a future fantasy? The USA has started getting into MDO with the Russians and Chinese as their main adversaries with whom they must contend with. There is a distinct feeling in the USA that its adversaries want to defeat it without letting it deploy its might. The US perception is that both Russia and China want to keep conflict thresholds below armed conflict and win a war without fighting. The tools being increasingly employed are information warfare (social media, false narratives) and cyber-attacks which deter escalation. Simultaneously, the implied threat of conventional and nuclear forces is being conveyed. Surrogates are being used. Battlespace locations are changing. In effect, the USA has recognized that it is being contested in all domains in a holistic multi-domain manner from a standoff position. The contest is both offensive and defensive to create complex dilemmas for the USA at a tempo that they can’t respond. That is a major worry for them.

In our context, our main adversaries are Pakistan and China. The entire range of capabilities being developed by China to contest the USA can be deployed against us. That is formidable. Pakistan has for long been hyper operating from selected domains through hybrid war. Both our adversaries are in collusion. They have ensured that the conventional space is reduced while heightening the implied threat. The physical manifestation of conflict is increasingly through the new domains. On the other hand, USA is our strategic partner. It is our antidote to this collusion. We are moving into the QUAD slowly but steadily. This push-pull scenario demands that the sooner we get into MDO the better.  As alluded earlier, the challenge for us to do so will be huge since our joint structures are still over the horizon. The opportunity is that any structure in the future can be built to cater for MDO, which is the larger set to jointness. I do hope I have given some food for thought to the NSA and our future CDS. I will bet on it that not many who matter will read this. Even if they do, they are most likely to trash it. As usual, are we going to be blind and not see it? Yes. We are. The future is here!